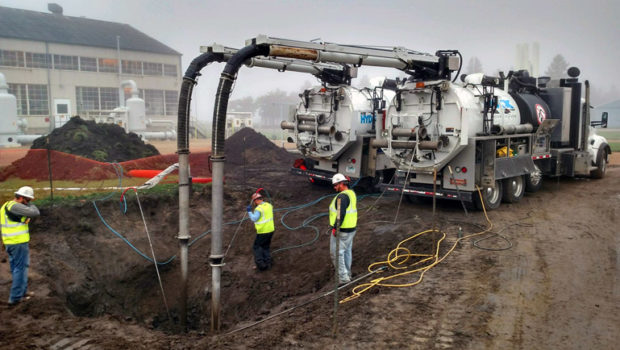 Construction tech in the 2020s is resulting in some of the most innovative construction equipment ever to be seen on jobsites both big and small. From remote control excavators to drone layout capabilities to robotic demolition machines, there seems to be no end to what science can up with when it comes to the commercial and residential building industry.

Hydrovac-excavation is one concept that fits this futuristic bill. How does it work? Says one recent report, hydrovac operates by literally injecting water into the earth via a hose which then liquifies the soil. Once the dirt becomes a sort of “slurry mix,” it can then be vacuumed utilizing a powerful pump and stored in the machine’s holding tank.

Hydrovac-excavators can dig down up to 70-plus feet and, when fitted with proper extensions, can operate from relatively long distances from the holding tank. Almost any type of soil is fair game for the hydrovac, including hard, frozen earth. 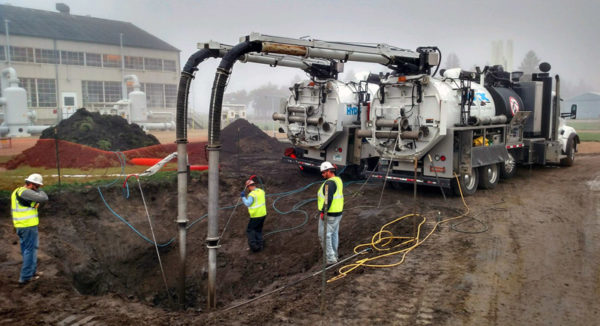 The hydrovac digging system is said to solve many problems that a traditional excavator or backhoe cannot. It’s not only a safer method for digging, but it causes minimum disruptions and damage to existing buildings surrounding the excavation area, making it the perfect excavator for tight, urban jobsites.

Here are some other benefits.

In terms of safety, you can’t beat the hydrovac. It not only keeps workers on the ground safe since there is no swinging steel bucket to worry about, it provides for a way toexcavate without the need for a manual laborer to work a shovel inside the dig, thereby eliminating the possibility of a potentially fatal cave-in.

Surrounding infrastructure is always of concern when excavating with a traditional digging machine since foundations can be exposed and undermined. But hydrovac digging is able to do away with that problem since it’s a much more controlled method.

The process is said to be far faster than traditional excavation methods. It only involves water, a self-contained air vacuum, and holding tank. No need for a trailer to transport an excavator to a jobsite.

Hydrovacs can be utilized from a good distance from the digging area, reducing jobsite congestion and crowding.

What are Some of the Main Hydrovac Applications?

Slot Trenching: You can dig narrow trenches with the hydrovac-excavator by utilizing a method of digging up less soil than you would with a traditional excavator bucket. It’s considered an almost ideal method not only for locating underground utilities but also for planting small diameter piping and conduit.

Debris Removal: This new digging method is perfect for removing debris and for cleaning wide areas without having any detrimental effects on surrounding buildings and infrastructure. You can also use hydrovac for cleaning out drainage structures, culverts, drywells, manholes, and more.

Potholing: This method is used to dig for and expose underground utilities without doing any damage to them. It’s said to be the perfect cost-effective solution when working in crowded urban areas like downtown New York City.

Tight Space Excavation: Speaking of working in tight urban jobsites, hydrovac-excavators are said to be becoming the preferred method for digging in overly tight areas, narrow roads and streets, and even in backyards that offer very limited space around the digging area.

Excavation in Cold Weather: Working in freezing and sub-zero temperatures can take a dangerous toll on workers, no matter how much protective clothing they wear. But by going with a hydrovac, exposing workers to the elements is seriously reduced.

Setting Poles: The hydrovac digging method can even be utilized for pole drilling and excavation.

If you’re looking for an efficient, fast, safe method for excavating and digging, the hydrovac-excavation system could be your ultimate solution. It’s a one-stop-shop, self-contained machine that can not only be driven on all types of roads and highways, but it takes up far less space on a jobsite than a traditional excavator. What’s even better, it’s a far safer way to dig when it comes to both construction workers and existing infrastructure.

NAF Aircraft Eliminate a Congregation of Bandits in Birnin Gwari